This thing is pretty heavy I would say it’s about five to eight pounds. It’s made out of powder-coated steel and the red clasp section, which locks on to your wheel is rubber-coated so it’s not going to scratch your wheels.  The lock is a pick resistant lock meaning it’s harder to pick than a regular lock.

Another unique thing about this wheel lock is it also functions as a chalk when you lock it around your wheel. This feature will keep your RV from rolling so it’s kind of a 2 For 1. The cost is about $50 – $70 so it’s sort of a less expensive option if you think of it in those terms. 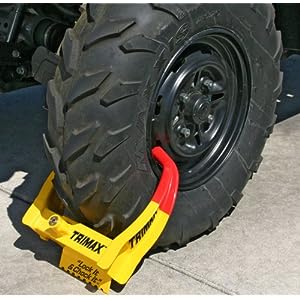 To use them take your key and insert it into the key cylinder turn a quarter turn clockwise the lock cylinder will then pop out, it is spring-loaded which lets you know that the arms are ready to be taken off.  You can take them completely off or just to your desired width, either way, you’re going to want to go ahead and put it onto your wheel at this point and just push in the lock cylinder to engage the lock. That’s it! They include two keys which are nice and you can very easily pop this thing open. Press the lock and it’s not coming off and so the trailers not moving forward.  The locking mechanism is said to be pick-resistant as well.

The weaknesses of this thing obviously on a twin axle trailer, in theory, a thief could simply remove your wheel with the wheel lock attached and still tow your trailer without a wheel. You could tow it a short distance which is one way a thief could defeat these wheel locks. If you have a single axle trailer this will probably work even better for you because when you think about it if a thief were to remove the wheel from one side of your single axle trailer they’ll have to come up with another wheel in order to steal the trailer.  Nothing is perfect but this is definitely going to slow a thief down quite a bit. If your trailer is in a high-risk environment I would have a lock at the coupler and a lock at the wheel as well.

Wildfires are Annihilating the West Coast

Why are Teardrop Campers so Expensive?

Patrick enjoys outdoor adventures and writes about them along with gear he loves on Teardropgo.com.  He can be found traveling about on the west side of the Rockies in his teardrop trailer. His experiences include backpacking, hiking, white water river rafting, RV camping, and more. From the floor of Death Valley to fishing in the Canadian Arctic. Outdoor fun on the road!